And the time of the year is here, where Kolkata rises after sun-set- the Ramzan time. After a full day of Roza, the Muslim community here takes on the streets with their offering of clothes, ittar and off course food items and we are more than happy to join them in their celebration. And, as usual, our Ramzan food walk starts …

Last week was my this year’s first visit to the chitpur area, the famed Zakaria street and was more than happy to see the offering. So, here I am trying to provide a brief foodie-roadmap for the same.

Please beware. During this time, the weather will be extremely hot and humid. And after this gluttony walk, you might look something like this … LOL. So, start the Ramzan food walk at Zakaria Street chitpur at your own risk.

You can check the location of starting point here

We started from the Nakhoda masjid on Rabindra Sarani. During this time of the year, please reach there after sunset (food stalls start from the afternoon though) so that you don’t miss the glitter and aura of the place.

Take the next lane from the masjid and start cursing me. Because, this time, there is no road beside the mosque. Its a mishmash of numerous make-shift stalls on road. Welcome to the Ramzan time in chitpur. Enter the lane. I promise you won’t be disappointed. A little further and you’ll find the stalls selling large bread pieces. Don’t be surprised. Those are the things you’ve heard so much about. They are called Bakarkhani and the second variety is sheermal.

Bakarkhani is a thick, crispy (often layered) flatbread. It’s almost biscuit-like textured and smeared with poppy seeds before baking in the oven. They serve 3 varieties here. Succumb to the snob effect and buy the costliest one- 80/ per piece and I promise you won’t regret it. For us, it went extremely well with morning tea (after re-heated a little in OTG).

Now, sheermal is kind of a more sweet/ soft variety of naan, where warm milk is used in the dough. And before putting it in Tandoor, they simply DIP it in a mixture of melted white butter and oil. We again purchased the prime version of 50/- a piece and the next day gorged on it with the afternoon tea at home.

The shop named Dilli 6, beside Taskeen makes a fantastic version of this. And, in fact, it goes extremely well with the Malai chicken. Please do not go by the name. Malai Chicken is Chicken Reshmi Tikka smeared heavily with Cream and butter. It’s a sin to eat for any fit soul, but then gluttony is a beautiful sin. Dilli 6 at Zakaria Street also makes something named as Afghani chicken. And its the same thing as the said Malai chicken- but with chicken pieces with bone.

While tea is here, how can ‘Biscoot’ be left behind for a bong? And we ended up grabbing some nankhatai biscuit. This is a variety of shortbread believed to have originated in Surat during the Dutch era. We got a below variety at 100/- a kg and around 8-9 pieces came at 500 gms. But it’s pretty mediocre in quality and avoidable.

Go a little further and at the right-hand corner of the first crossing, you can find Taskeen shop. They were making some brilliant Chicken Changezi and Maahi Akbari. Do not bother, you won’t find Chicken Changezi in Wikipedia. It’s the desi Muslim answer to KFC-ishtyled chicken. Large chicken pieces are double fried and served piping hot. Maahi Akbari is large Katla fish chunks marinated and deep-fried. Damn yummy and a must-have….. Chicken Chungezi was coming at 440/- a kg and Maahi Akbari was 740/- a kg.

While I was chatting with the shop-boy, he suggested “saab, thora falooda bhi taste kijiye ? ” “Karaiye” was my response and I was served with one of the best falooda I ever had in my life along with a piece of shahi tukra. Personally, I liked the shahi tukra of Royal Indian Hotel better, but this is not bad by any means… Falooda was 40/- a plate and so was Shahi Tukra. 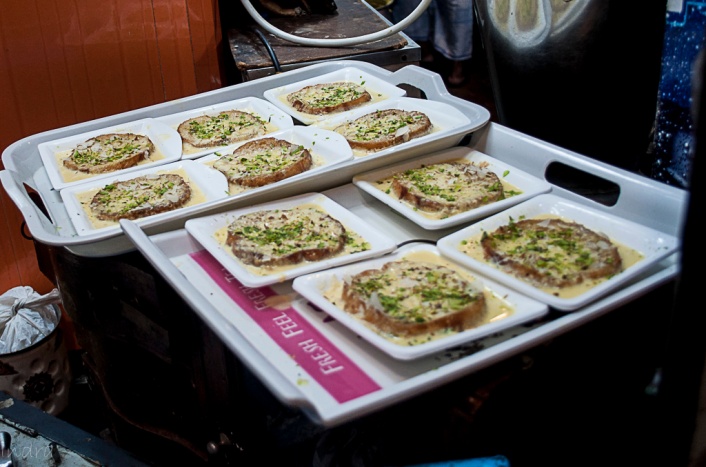 After all these sweets, I was craving for some gosht-Roti. And as per suggestion by my good friend Deepanjan Ghosh, I went to Bombay Tea house, commonly known as Bambaiya.

This is at the first left lane corner from the Nakhoda Masjid. They serve a brilliant beef chaap– to be paired with tandoori roti (all year long) and a pretty good Beef Boti kebab (Personally I like Adams’ version better though). The quality is consistent throughout the year. Go for it, definitely. You won’t regret it. But, let me warn you. The biggest challenge this time of the year is to find the shop, as its name-board is covered in shamiana and posters now. 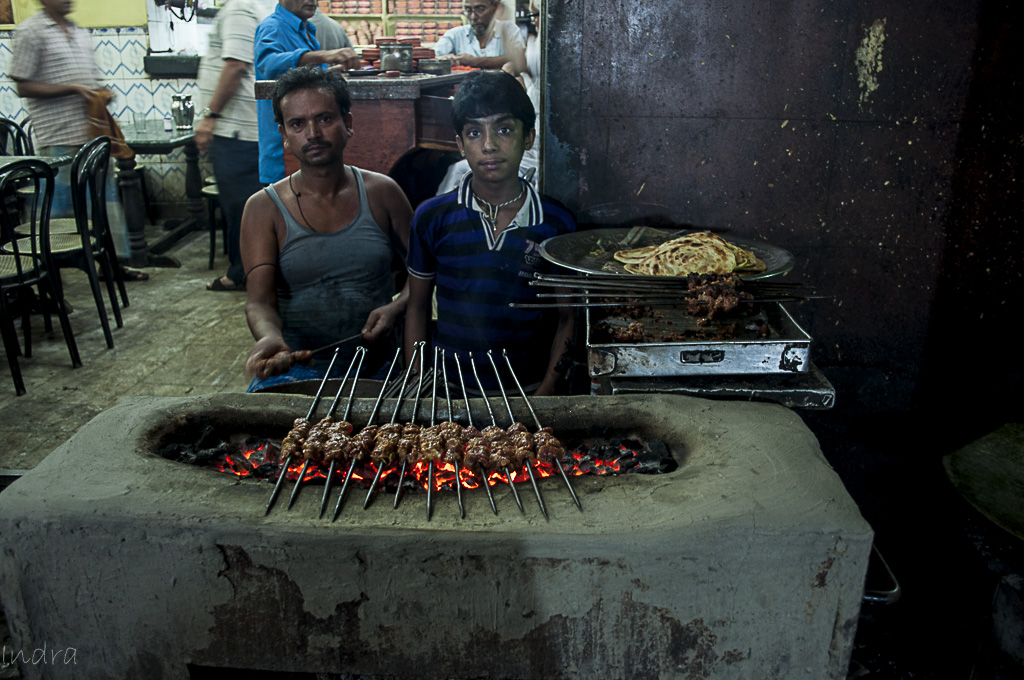 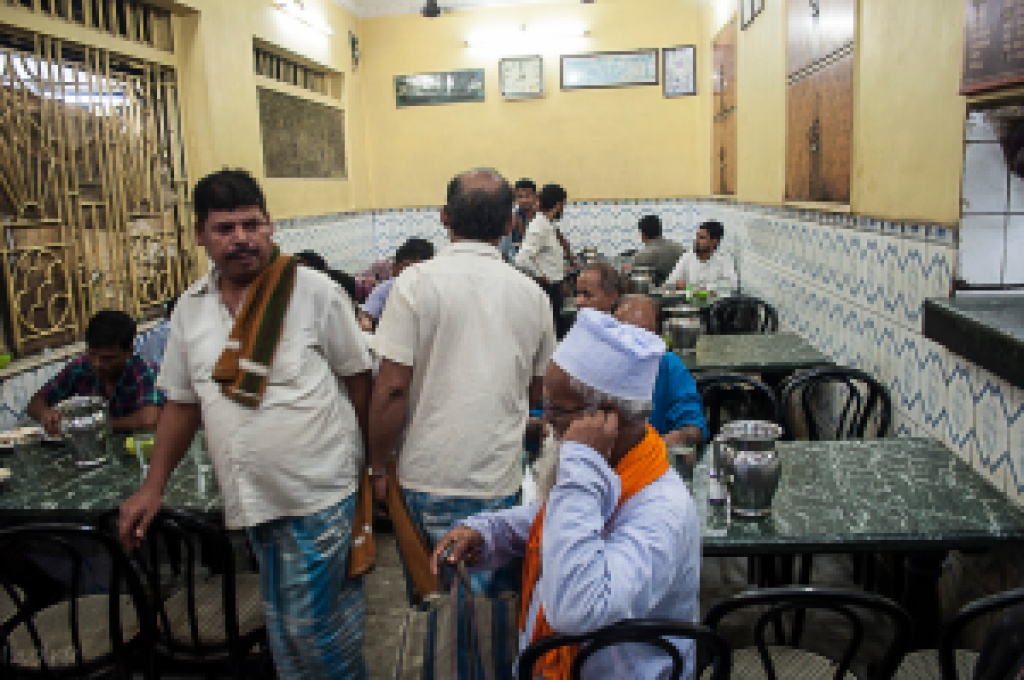 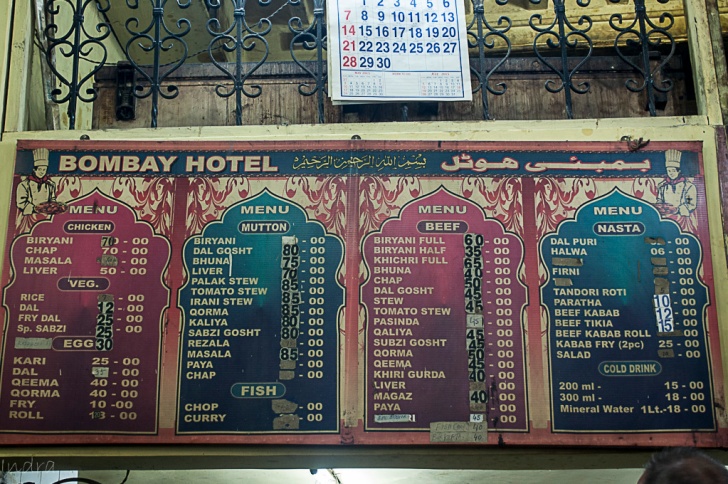 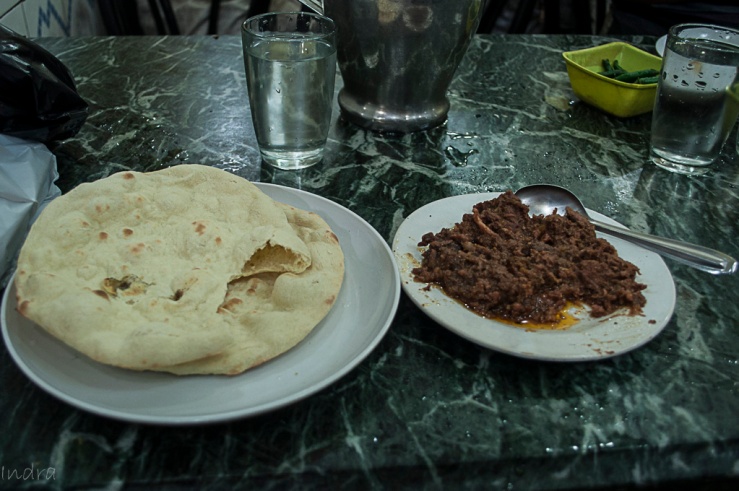 Our last stop should be Haji Allauddin Sweets at the phears lane just a little way back for their Battisa. It’s primarily a halwa with 32 secret ingredients and loaded with dry fruits. The dish is seriously heavy. The best variety there is 400/- a kg and topped with mawa, makhana, and coconut slices- go for it. You won’t regret.

Finally, as per Shadab miyan- the owner of the place proudly says “our gulabjamun is world famous in Kolkata”. But seriously, move along haldirams and Tewari’s and you enter this place. The slight saltiness from mawa and aroma of ghee takes this thing a notch higher.

And this year in 2019, I’ve found another beauty at Haji Allauddin Sweets. They’ve made a Gond ki Laddu, heavily ladden with fried dry fruits, as well as almond. And this is a sin at 15/- per piece.

Now, in (2018), I’ve found this shop after Delhi 6 (beside Taskeen). they are making a killer Chicken Malai Kebab and chicken Pyare Kebab. The chicken malai Kebab is large chunks of chicken marinated in reshmi kebab marination and finished in tandoor. The entire finished product is then tossed with cream, butter, and slight lemon juice. Result is fabulous. On the other hand, chicken pyare Kebab is chicken sheekh kebab sprinkled with chat masala.

Coming to Haleem, I can’t stop myself from giving Gyan even here. Haleem is said to have originated during the roughly 10th century in Arabic countries and probably was named Harees. We get its reference in Kitab Al-Tabikh (Book of Recipes), the world’s oldest surviving Arabic cookbook. The same dish was introduced in India by the Arabic soldiers in Hyderabad Nizam’s army and hence Hyderabadi haleem was invented.

My favorite places for Haleem in Kolkata

Kolkata haleem is somewhat of a different texture and uses a large variety of dals rather than wheat and hence the different texture. But, let me be honest, I personally am not much of a Haleem guy,  but this year I tasted it in Sufia. They sell it in 4 varieties- beef, chicken, mutton and hold your breath- Magaz. Honestly, I’ve tasted Beef and mutton variety and it was good- recommended.

You can check about my experience at sufia in details here …

And if you have some time, in hand, you might like to watch my food walk video of 2017.

You can check my regular foodwalk experience here

Olypub and those countless moments

The story of sizzlers … and Mohamushkil

Pice hotels to try before you die in...

A detailed and mouth watering blog… thank you Indrajit da.. will surely be there soon to have a delicious food walk…

OOOhhhh what a place for this time of the year, i hav ben to Bombay tea house before but this time the whole area seems like a food heaven, goin there as soon as posible. You’ll soon be rewrded as Best food Guide of the city by Tamron.

Too good … I have to soon visit here

Bah bah…I’m myself yet to pay a visit this year…this has made me restless though! Gotta go this week

Thnx for liking it chief

Thoroughly enjoyable (especially for the photos) and informative! Can’t wait to go for a foodwalk.

LOL- Thnx for liking it

Had a mouthwatering time while going through your experience at the lunch time…..Wonderfully penned experience….At least in the corporate blast we still have people enjoying the simplest factors of life….thanks for this wonderful share…

Well written, just a small point, I think you confused language and religion in the first para, as in ‘we Bengalis’ with ‘the Muslim community’. I’m sure you agree that the two intersect also. Thanks for the great post!

Definitely i agree with you. Its my mistake that i jumbled up. Thanks for pointing out the same…..

Great article and journey Indrajeet. Growing up in Colootola, Zakeria street area these were some very must haves during Ramzan, except Chicken chungrezi (must be a new entrant to the list). Try Daal gosht from Islaamia hotel, not sure if they still make it.

Was planning to go, thanks for all the information! The pictures are brilliant!

Yummy….. I did food walks in Delhi and during Ramzan old Delhi is a must visit the place. This reminded me to go to Chandani Chowk asap. Shahi tukda looks so different then what we get here.

Yes, but both are good in their own ways

Nice read and thanks for posting. Would this be at Kidderpore?

No. This is at chitpore/ Zakaria street area. Basically the area adjacent to nakhoda masjid

[…] spices and that’s the beauty) was good I must say, but the showstopper was the Beef Chaamp. Apart from Bombaiyaa, I hardly had anything like this in any restaurant in town (I am not talking about the home cooked […]

[…] spices and that’s the beauty) was good I must say, but the showstopper was the Beef Chaap. Apart from Bombaiyaa, I hardly had anything like this in any restaurant in town (I am not talking about the home cooked […]

[…] During Ramzan, the entire Zakaria street magically transforms itself into one giant food street. Shops get a new make-over and more than the food (which they serve throughout the year), its a community feeling there. For haleem, the legendary Sufia is there and they serve haleem in 3 varieties- beef, mutton, and mag…). […]