This post is to welcome the new baby in town- Tak Heng, the new chinese joint in town. We were cordially invited by Prithvish da to sample the food and we WERE impressed. In the following long write-up, I would try to suggest what all one can try while in Tak Heng. As most of the dishes there are pretty impressive definitely quantity-wise and mostly taste-wise, so, it won’t be an easy task. Still, what’s the harm in trying ?

Tak Heng is tucked in one of the narrow lanes in South Kolkata. If anyone is travelling from Rashbehari metro station, take an auto towards gariahat and get down at Anand Sweet shop. Walk towards souther avenue, beside Tyagraj Hall, lies this little gem. Its open on all days on standard business hours. Google map direction attached.

The place is more of an eating house than a fine dining restaurant. AC is there with comfortable seating arrangement. So, no complaints.

We were first served Chef’s special Chimney Soup. Now, this is a revelation. We are used to the chimney soup by Eau Chew, and maybe for the first time in my life, my loyalty shifted from eau chew to Tak Heng (at least for this dish). This dish was full of squid, crab meat, fish, chicken, shitake mushroon and what not… and the fire inside the chimney was actually on. Secondly, the raw smell of ingredients was not here… It had made our evening.

Along with the soup, we were served chef’s special chinese styled salad served in an innovative manner. It consisted of raw mango with thai dressing, though a veg salad, the spice factor was pre-dominant.

Fried chicken wanton was served next, which, after the previous two, was not much special. Standard good wanton it was served with sweet chilly sauce (maybe because I like the steamed version better). Next was King crab with chilly oyster sauce. Now, this dish simply bowled us out. Just imagine, take a huge king crab (around 500 gms), deep fry it and toss it with chilly oyster sauce with button mushrooms and cherry tomato. Who are we lesser mortals to not to fall in love ? Upon questioning, prithvish da told that they have their fixed vendor in Canning, who supplies them this size on a regular basis. One portion of this is definitely enough for 3 persons. Definitely recommended. 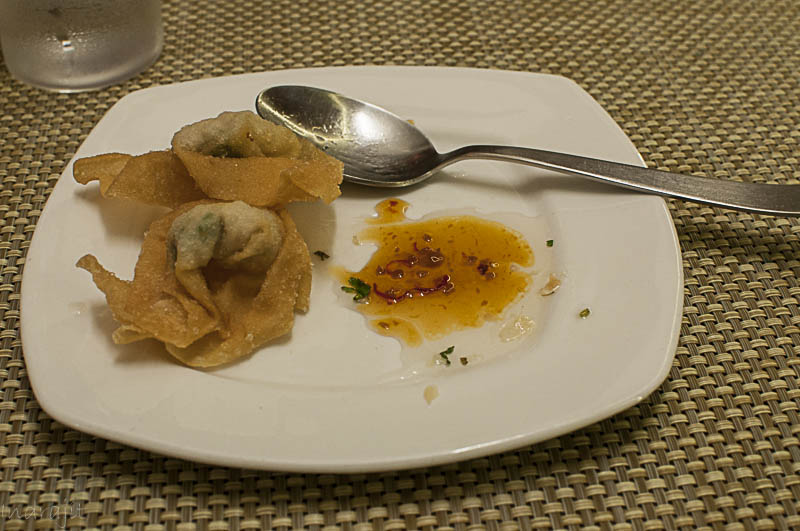 Next was whole fish in chef’s special sauce. It was basically a small betki deep fried and tossed with chilly orange sauce. The strong aroma of fresh orange and spice quotient of chilly was taking the whole experience to the next level. It was a meal in itself with steamed rice and vegetable served alongwith.

Chinese staples like Noodles and fried rice were served in between. They were good, but after the crab, nothing was impressive enough. And just at that moment, the Lobster with Hot Garlic sauce was served. It was a gigantic (appr 300 gms) prawn with its flesh scooped out, tossed in hot garlic sauce and served on the shell itself. Result was phenomenal and immediately, we forgot about the crab. This was seriously good. The next chicken dish (sorry, i forgot the name), though non-spicy and good enough, was no match for the mighty one….. 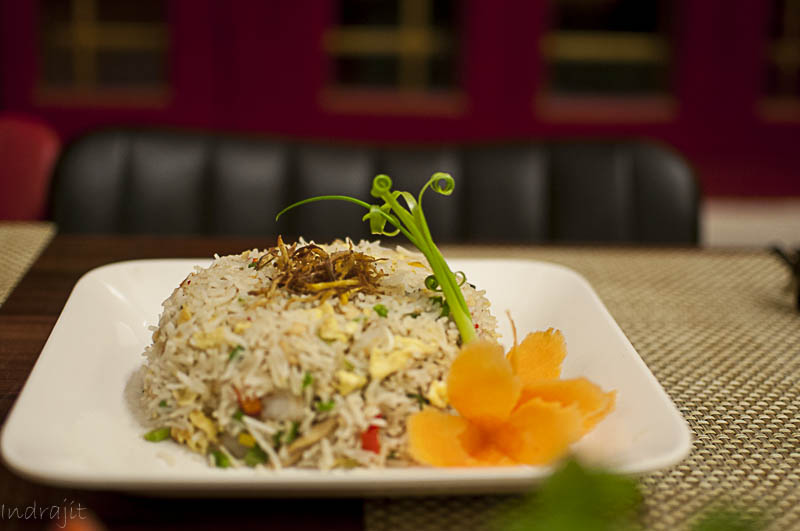 After this whole show, we were getting dozed off, while the owner came up with a quiz. A strange looking dessert was served and we were asked to come out with the name and if possible, the ingredients. WE FAILED- in identifying the dessert, but not while gulping it down. It was Sankaya- the thai dessert made with pumpkin and egg as its main ingredient. It was smooth and brilliantly finished. My suggestion will be, save some portion of your hunger for this cutie. Take half spoon of sankaya and other half of the vanilla icecream and you’ve just tasted a slice of heaven.

Needless to say, we were full. But being the seasoned gluttons that we are, we managed to thank the owner and crawl out of the restaurant. Overall, this place is definitely recommended and not to be missed. And yes, this place is not another branch of the legendary Tung Naam, poddar court. So, unlike me, please don’t believe it. go there and you, in all probabilities, won’t be disappointed.

2017- a lookback on Mohamushkil’s experience

Going back to the roots- Samvad at Tata...

Thanks for the great write-up. On my next trip to Kolkata, this will be a top priority

Hey Indrajit!
I’d like to update that Tak Heng is now shifted along with it’s old team at a new & larger premises @P-452B Keyatala Road, Kolkata 700029. Near Garden Café Express. Do come over and explore the new menu.