During my service days, I used to travel to Bihar and Jharkhand quite frequently. And found some strange round shaped wheat and sattu-made balls were burnt and consumed happily by a large number of people. One fine evening, after office, I caught hold of one such dish and came to know its called Litti and the accompaniment was traditionally called chokha (mashed potato flavored with cumin, tomato crushed, coriander, green chilly among others).

This whole thing was served on a sal leaves plate usually. At the first meet, I was bowled over. The raw taste and the explosion of flavors just had a mesmerizing effect on my nerves. And, in Kolkata, I kept on looking for the same.

However, in Kolkata, I usually caught hold of a lot of food varieties but yet to find a good litti shop. Lots of shops make it, but the perfect roasting and that earthy flavor mixed with desi bhaisa ghee was missing somehow. So, when one of my friends suggested this shop, I happily rushed in. Its near Nimtala burning ghat .

If one moves from Nimtala burning ghat towards his right towards kumartuli ghat, there are 2 shops which sell them. People say the first one was more authentic and made the better staff. Frankly, I’ve visited that one only, so, will be able to comment on the same.

You can find the rough google location here

Its a shabby shop, to say the least. There are 2 shops in fact, under one roof. The left one served litti+ aloo chokha and the right one sells gulabi chai. 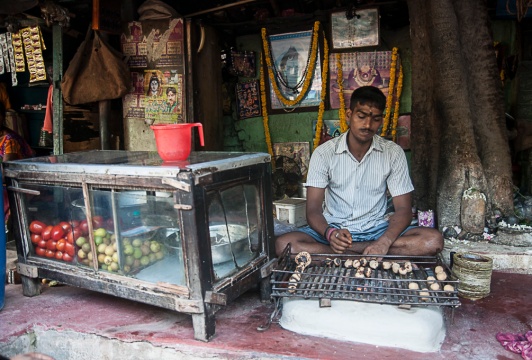 They sell it at 30/- a plate- no negotiations. The offering is 5 small littis (little burnt) with a large spoon-full of aloo chokha and dhania-dahi chutney. Frankly, we were a little skeptic about the price. But, when we saw the making process, we were somewhat convinced, The littis were roasted in the open charcoal-grill in front of the guy and then thy are taken on a bowl and smeared with desi ghee (” the ghee is homemade”- he proudly exclaimed) and that had made all the difference.

The first bite and we understood. The taste was mesmerizing. The rustic flavor mixed with ghee with the tangy aloo chokha, the chutney and a small bite at the green chilly was something out of this world. Each litti was having one kismis inside it to increase the flavor and it did so. 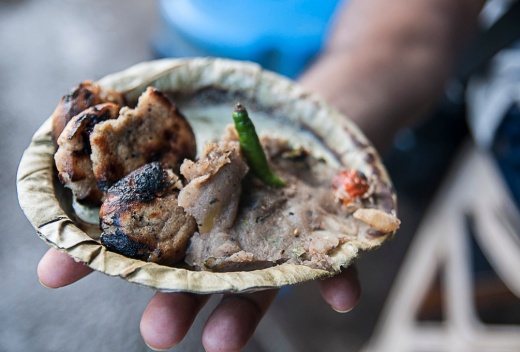 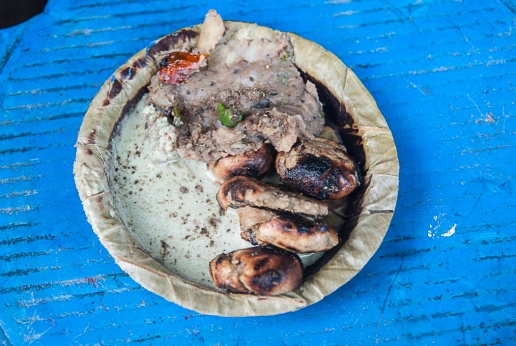 The litti with chokha

And we moved to the next shop, run by the gentleman’s father for gulabi chai. This gentleman seemed straight from the age of ramayana- well built, muscular, with a long black beard and wearing saffron colored dhoti… He took his tea making seriously, very seriously. He did some puja, offered tea to his lord and then started making for us lesser mortals. And, we started shooting instinctively. Somehow, within one-two shots, the gentleman got very angry and started shouting at us – it was that he doesn’t like to be shot – at least without his permission. We deleted all the shots from camera respecting him but one shot. 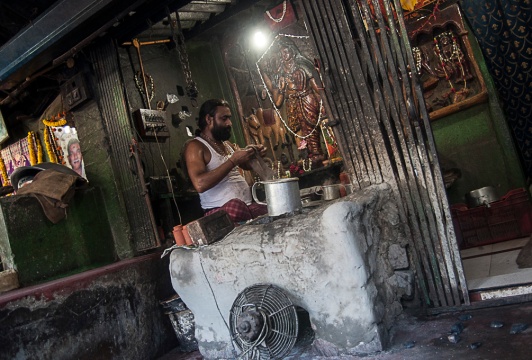 Frankly, I’ve never had tea anywhere with rose water and this guy surprised us. The tea was heavy with milk, then rose water was added and finally a slice of milk malai was floated on top and one tulsi leaf (we didn’t like that, frankly), like lassi (a little more for us because probably he was feeling bad for scolding us… ). The result was nothing less than a miracle.

The heavy tea, itself, was a meal at 20/- a glass. And we were full (who wouldn’t be after 3 plates of those pocket littis and one glass of this heaven ?

Okay, please do not curse me. I understand that there are multiple litti stalls around Dalhousie and we all have our favorite ones. But being near to my client’s place, I particularly like this one.

This gentleman sits at Wellesley place, at the lane next to the tall UBI Bank headquarter at Dalhousie Square. The location can be found here on google map. They do some neat varieties- litti, sattu Parantha and Aloo Parantha. The littis are flat, unlike the ones we get in Bihar. All the items come with a regular version and another version with ghee. And like any seasoned glutton, I prefer the one with ghee.

As soon as you order, they’ll start preparing the food and it’ll be served to your leaf plate piping hot. He starts from around 1030 in the morning and finishes up by 4 PM. Some watery aloo Sabzi is served complementarity, but I’d suggest to go for his Aloo Chokha, which is a much superior product.

Okay, this gem was found by sheer chance. So, I was waiting for Good Vegetarian Food to start their Burrabazar foodwalk, at Moonlight Cinema. And while roaming here and there aimlessly, I chanced upon this gentleman selling Litti – again. He sits at the crossing of Tarachand Dutta Street and Syed Salley Street- a few buildings away from the Moonlight Cinema. And while talking to him, he made some special stuff for me.

You can check the blogpost on Burrabazar foodwalk here …

The litti was stuffed with ground, roasted sattu (as usual), but also with chopped coriander, green chilly and some mysterious chutney. Also if I’m not mistaken, some chokha went inside. The whole thing is then smeared in Bhaisa ghee. And that gave it the needed twist. The litti was flat, unlike its Bihari counterpart. But whatever be the shape, the taste was fantastic. This place is definitely recommended if you’re around that area.

The food variety at Kolkata is simply mind blowing and I am proud to say that Kolkata has won the award for Best Street Food in India, by one travel portal. And considering the Bihari population, the litti scene in Kolkata is not that bad. What is your favorite litti shop ? Do share in the comments section.

Et Set Mix- nothing authentic about it

I did not know about this gem. Now I just have to go there.

Ghure eso. Thanks for liking it

A hidden gem again! You are doing a true food blogger’s job.Loved reading the experience!

Can I have his number

Thank you Indrajit da! I was having a Litti craving as winter starts setting in here 🙂