Summer time is here and good-food days are almost over, or at least what I thought- and suddenly this invitation came from Casa Kitchen restaurant in Casa Fortuna hotel for tasting their summer menu. “It is veg” was my first reaction but lots of people assured that the food makes up for this and off I found myself with 3 other noted food bloggers in Casa Kitchen one day.

How to go and when to go:

Its just beside the French motors showroom near minto park. Basically, its opposite to Gorky Sadan and besides Tewari’s in that area. Enough said. Its open from 11-11 on all days. But the summer menu is from 18th-31st May only.

Its a fine-dining restaurant and pretty much up-market in decor. Comfortable, traditional seating arrangement and nice big windows on all sides. If you can find a seat besides the window, nothing like it.

Now the main discussion starts. Being a purely vegetarian restaurant (even without onion and garlic), they serve hard drinks and some to-die-for cocktails. That’s definitely a good point for my veggie friends. We were served an welcome drinks named as “cucumber-curry leaves lemonade” and the sharp taste just made our otherwise boring evening interesting. The other one was Kiwi Blast. After tasting the welcome drink, this one couldn’t stand and we were looking for some more of the spicy “cucumber-curry leaves lemonade”. Its there in the regular menu and is definitely a must-try.

The third mocktail that were served had mixed reactions. Its called “Chatka Merry”. Its basically a version of virgin merry with guava juice substituting tomato juice. The salt rim was perfectly done. Other members were ecstatic but somehow personally I am kinda hater to the flavor of guava. Hence, an ok-ish item for me.

This summer menu interestingly has menu varieties of cold salads and sandwiches. This segment was long neglected (for whatever reasons) in Kolkata food scenario. We were served a long list of the same.

The first was traditional Ceasar salad and Waldorf Salad. Both were good. Maybe not heavenly (veggie effect for me ???). the ingredients were extremely fresh which made the salads stand out and the dressing was minimal to give us chance to taste the body of the salad. 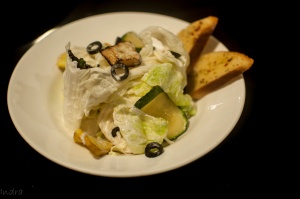 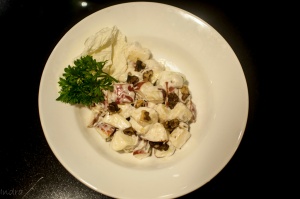 Next was Grilled Mediterranean Salad with balsamic glaze and Go-green salad. The first one was fresh with distinct flavor of balsamic vinaigrette and revelation was Pasta salad. It consisted of penne with a variation of tangy thousand island dressing and sprinkled with olives- damn good when served cold. 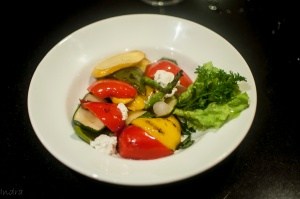 Next were 2 types of sandwiches. The first one was cool-casa sandwich. I personally felt it nothing special with just a normal cold sandwich with the filling of exotic vegetables like pickled zuchini, bell peeper, babycorn, gherkin with mustard mayo etc. But the second one was watermelon sandwich- which was damn interesting. It consistes of watermelons rounds stuffed with a cheese and cottage cheese filling and sprinkled with feta cheese- sinful but damn good. 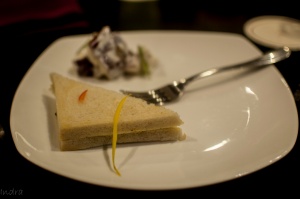 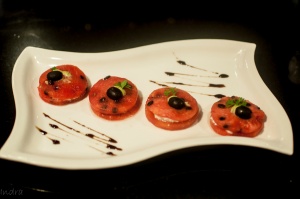 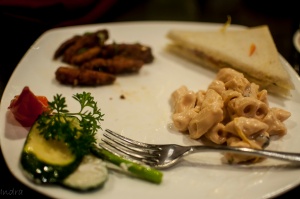 Next came some standard dishes like Sizzling paneer tikka and crispy chilly baby corn. Paneer was extremely soft and fresh and claimed to be home-made and also nicely marinated but babycorn was the usual fare.

We ended up with chocolate mud cake with chocolate sauce. But, till then, we were full and was hardly able to move. Who thought I could be full and happy with Veg food ? Thanks casa kitchen for making the impossible happen.

A definitely must go and ideally the summer soiree menu is a must try. Pocket pinch is around 1000/- per couple with mocktails.

My favorite places for Haleem in Kolkata

[…] from Casa Kitchen for the Kebab and Beer festival. But from my past experience with these guys (https://mohamushkil.wordpress.com/2015/05/19/summer-soiree-casa-kitchen/ ), my inner self felt some confidence that there may be something worthy in their veg kebab menu. […]

[…] vegetable caesar salad. These guys make a great caesar salad and I can vouch for that from their summer soiree food fest and this time also, they made it just right with the perfect amount of vinaigrette dressing. But, […]

Saved as a favorite, I love your blog!