A prelude of picture perfect(?) Gangasagar

Well, back after a long time. Apologies…. This year, seriously, planned to go to Gangasagar, but maybe I am becoming old for these adventures, maybe didn’t get an accomodation, had to drop the plan. But, feeling guilty inside, went to Babughat just before the sankranti date to catch a glimpse of India. 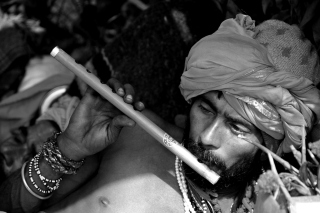 He was sitting, or should I say lying just beside the main entrance, setting the mood for the visitors maybe. Some strange earthy tune came out from the flute- mostly inspired by the shilabati from insie his chhillum. But, he was inspiration enough to enter the pavillion. Some other frames were awaiting me. Little did I know, that I’ll get my most photogenic candid model inside…..

Seeing this gentleman, one strange question crossed my mind. What is it, that takes out all these people out of their homes, families and takes them on this brutal journey. This baba was staring endlessly at the people passing by and nodding a little whenever somebody gives him a 10-2- Rs. note. But, certainly, its not the reason for him to come put like this. And this strange make-up, strange color of hair- an out of this world feel.

But, somehow , he was extremely happy to give a pose for the camera- marketing principle ? Maybe. I never could know.

Same with the next gentleman, lost in his own world. If you want, he’ll tell you a thing or two- about Hindu spiritualism- IN HEAVILY OXFORD ACCENTED ENGLISH. Where he’s from, nobody knew…………..

Sunlight was pouring down on him and he was talking endlessly- different karma and divine birth theory. Sight from his glasses were telling a different story untold, and as he made us understood, life was moving by in front of him.

Was I envying him ? Maybe………. getting out of the rat-race is never easy, but he did make it, and we could not. We could not find his story, possibly, nobody will – ever. But his verbal expression had made a lasting impression on us.

While coming put from the mela pavillion, we met this little lady dancing in her own tune unheard to us. Really, no music, no song and hundreds of human pushing each other- but here she was, dancing …….

We got jut a good snap of her , but its more than enough. She’ll last in my memory as one of the best candid models I ever worked upon.

Here I am. Back in my own world- family, financials, my junior jumping with me to get on my lap. But, somehow the world of these people will keep haunting me. By nature, all men are nomads- the nomadic instinct runs in our vein and educational system is here to put it to sleep. But, someday, all of us are waiting to answer to this call, to join the endless journey- life……………..

God’s greatest gift to me

Restaurant Week India and our journey to Guchhi-...

My introduction to wine