Sadly, the original A D Cabin was closed now, due to some internal issues. But it has been reincarnated. Please read till the end.

If you’re anywhere near Manicktola more or Sukia street and looking for a light afternoon/evening non-veg snacks, look no further. Your heaven has arrived. Welcome A D Cabin, Sukia street.

It’s very near to the sukeas street bus-stop, in between manicktola and raja bazar science college. Get down and the stoppage and enter sukeas street towards Amherst street. Cross 6-8 shops on your right and you reach this place. The place is open from 1 PM to 9 PM in the evening. Statutory warning:- do not expect any fancy service

You can check the location here on google map

Upon entering the restaurant, you’ll find some small stone-topped table and smaller wooden chairs and an old waiter will approach you. The menu is written and hung on the wall near the entrance only. So, no need to ask for a menu card. Straightway, go for the special mughlai parota here. Now, for the new ones, mughlai parota is nowhere related to moguls. Its an egg and minced chicken stuffed big parota (shallow-fried bread) and served with potato sabzi (a strange but lovable combo) and salad. The whole package is just awesome.

Any story for Mughlai Parota ???

Contrary to the popular belief, mughlai Parota was invented during the mughal era in India, during emperor Jehangir’s time. He was bored with plain keema parota and hence, his loving cook Adil Hafiz Usman was given 10 days time to think up of something new. Now, we don’t know what was the punishment, but the cook actually came up with Anda-Roti, which is known as Mughlai Parota today. Now, this gentleman Adil Hafiz Usman was from Burdwan. When Burdwan became the Mughal empire’s official revenue-collection center for Bengal at the time of Shah Jahan, eateries serving Mughlai cuisine came up.

Quoting from the article in The Hindu, “Usman told his son not to go and work in Avadh (Lucknow), Dilli, Agra or Dakkhan (Bijapur, Aurangabad, Hyderabad) after a chef from Lucknow insulted him. Usman’s son Farogh began to experiment with Mughlai paranthas at Burdwan and never shared the formula with the chefs of Lucknow and Dilli (from Barbara Mansfield: History of Mughal India and its Cuisine). It remained with the seven sons of Farogh. When their descendants began to work as chefs in 19th century Calcutta, Mughlai paranthas became Calcutta’s own dish. It was relished by Bengali gourmets as also the men of the East India Company.”

Finish this and go for the next beauty- the mutton braised cutlet. Mow, its a pretty straight-forward bread-crumbed cutlet (Kolkata styled) with minced mutton. Brilliant. Healthy filling and perfectly done. goes extremely well with a glass of chai. Please remember, in a good old-school cutlet, there is never a slice of chicken breast- no never. The meat is pounded coarsely, mixed with chopped onion and green chilly (and they should be felt inside your mouth) and this process give birth of legends. 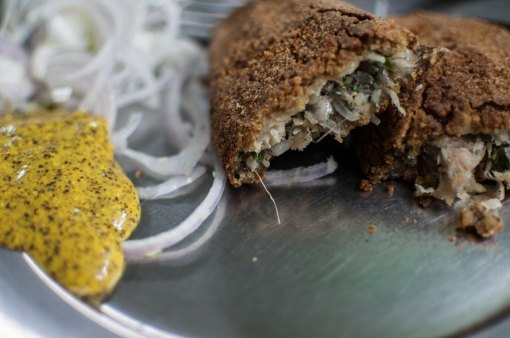 Still, if you can fight further, go for the last prized item- chicken stew with bread toast. This is an extremely popular item among the near local body-building club members. There is a hefty chicken piece with a whole onion, carrot, beans, potato, and seasonal vegetables. This is served with a lot of gravy and in a bowl.

So, you feel full- happily move towards the cash counter for payment and wow- get surprised. Pocket pinch ? Around 125/- per head. Bless these souls and come out with a happy memory.

Due to some internal management issues, A D Cabin was closed a few years back. But recently, my good friend Amitabha da, from the same area, called me with a smirk of pride.

“Do you know A D Cabin is reborn ?

” What rubbish …” was my sweet answer.

“You food bloggers do not know anything. Come let me take you there”.

In reality, the staff of the former A D Cabin was taken by some other person and this new shop is there- luckily with the same product quality.

The location can be checked on Google map here

And about the new food

And once I went there, Amitava da ordered their Braised cutlet. And I must say, I am damn expressed. For 50/-, the size has to be slightly small as per my preference, but if they hike the price slightly, it’s a brilliant product. Inside is superb, crunchiness is spot on and the kasundi is superb. Even the mughlai parota is good. The filling is tasty and frying is perfect. Obviously, I’ve ordered for the special mughlai parota and it seems, they’re back to their good old days.

It’s still a kiosk with a few plastic chairs thrown on the footpath and I’m not very sure whether it can still be called a cabin. But once it comes to the Braised cutlet, they’re definitely one of the best. Thanks go to Amitava da. And though I am not very sure on how long they can survive with this pricing the low sales volume, let’s hope for the best.

The fish fry, despite using original Kolkata Vetki, is quite average. I mean the taste is good, but they seriously need to rework the pricing and give a thicker fillet inside.

Kolkata Beefwalk and the sweet ending

Murshidabad chapter- The ittar-wala and nawab

Kalna- the city of Chhena and makha sandesh

The humble kachori and its multiple love interests

Hey… It was great to see that finally someone had taken the trouble of writing something on our Para’s A.D. Cabin. I have been munching its Cutlets and Moghlai Paratha’s from Childhood and the quality is still excellent.

Strangely there has not been much media hype about this joint like Mitra Cafe Or Allen’s Kitchen. Allen’s Prawn’s Cutlet is at present in such worse condition, yet I do not know why the media makes so hue and cry about it .

No sadly it cosed down few months back